I had never heard of Steam Punk till a couple of years ago when we had several enthusiasts stay at The Railway Carriage and Railway Cottage. This weekend May 4th and 5th see's the inaugural Minehead Steam Punk Festival. MINEHEAD is set to be whisked into a world of Victorian science fiction and fantasy as it will host its first ever Steampunk Festival over the early May Bank Holiday. Steampunk is a growing genre inspired by the works of HG Wells, Jules Verne and Arthur Conan Doyle with retro influence of magic, time travel, aliens, airships and submarines, dinosaurs and exploration. READ ON FOR MORE INFO 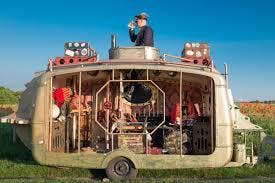 Victorian seaside resort in stunning location nestled under Exmoor, with added benefit of the West Somerset Railway. Steampunk Traders in the Old Hospital on the main street opposite the Regal Theatre and lots of live entertainment - TBC following change from LLandudno, but plans include Ichabod Steam, Kiss Like Ether, Greg Chapman, Erwyd Le Fol, Foxee Stole, and The Captain Of The Lost Waves!! 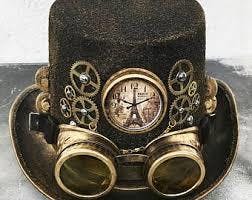 Steampunk is a subgenre of science fiction or science fantasy- think Scrap Heap Challenge!! It incorporates technology and design inspired by 19th-century industrian steam powerered  machinery.[Although its literary origins are sometimes associated with the cyberpunk genre, steampunk works are often set in an alternative of the 19th century's British Victorian Era. In  a future during which steam power has maintained mainstream usage, or in a fantasy world that similarly employs steam power. 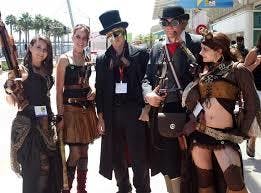 Check out full details for this weeks festival with events, music and performances on the Minehead Steam Punk Facebook Page